Ocean – An Exhibition for Change 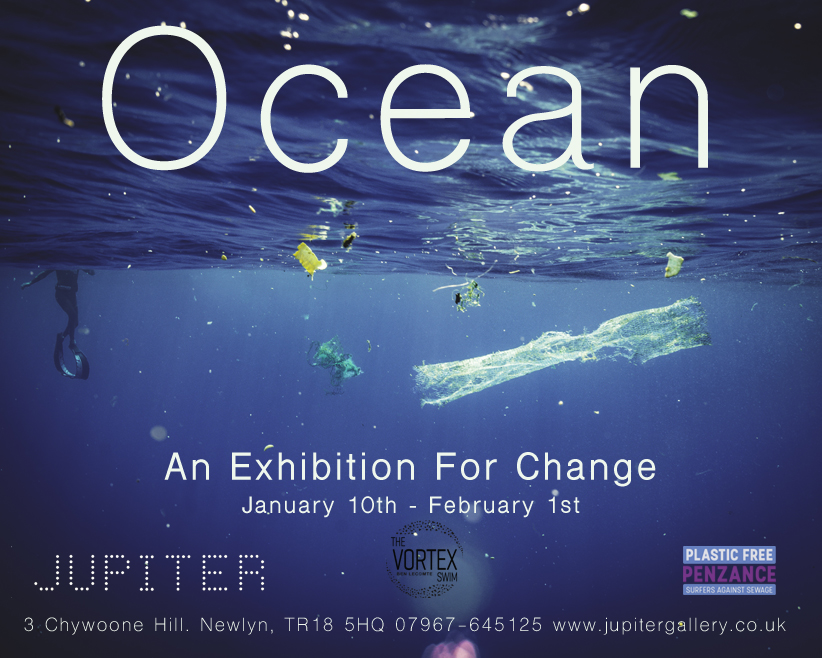 ‘Ocean – An Exhibition for Change’ comes as statistics show plastic production is set to grow 20% by 2050.The production and disposal of plastic uses 14% of the world’s oil and gas at the moment – by 2050 plastic could be driving half of the growth in oil demand and accountable for 2.75 billion tonnes of climate emissions. Not to mention the eight million pieces of plastic that enter the ocean every DAY, causing pollution and having a devastating effect on marine wildlife.

Using art as a medium of communication and interaction, the exhibition aims to raise awareness of the state of our ocean and provide positive solutions towards protecting the sea and marine wildlife. It will feature photography from Adam Hill, a junior doctor at Treliske, who joined transatlantic swimmer Ben Lecomte’s expedition through the Great Pacific Garbage Patch.

On World Oceans Day 2019, Ben jumped in the water and swam from Hawaii to California via The Great Pacific Garbage Patch. His focus was to use a scientifically co-ordinated swim to draw attention to the state of our oceans, in particular plastic pollution. The expedition was known as The Vortex Swim, and was visually documented with some breath-taking and shocking images.

Adam joined the crew out of his interest in the potential for plastics to adversely affect health. He wanted to use his skills as a photographer to help lend voice to the current momentum against single-use plastics and the positive changes we can all make in our lives. The journey saw the crew complete the first ever trans-pacific micro plastic data set, while the photos ran globally thanks to media powerhouses such as National Geographic, Forbes and CNN.

Adam will be recounting the experiences of the crew and Ben whilst they traversed this remote corner of the planet, touching upon some of the scientific work undertaken, how our everyday actions contribute to the global crisis … and how we can all help reverse it. 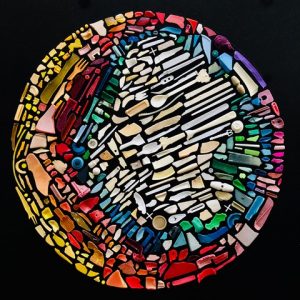 The exhibition will also feature the work of artist Dan Lewis, who is retracing a relationship with plastics, which began with his father who studied chemistry in the 1950s to become a plastics technologist. Plastics were an ever present but invisible in his family home; as a source of income, as vital tools that appeared to make their lives easier and as a continual ‘modern’ habit.

The coastal plastic arrangements he makes, reflect back to the viewer what we value and when we valued it, guessing and imagining what purpose or function the original objects performed in a previous life.

Dan said: “The images also show the ingenuity and brilliance of so many who have designed and conceived objects, products and solutions in industry since plastics were first invented in 1907; and it is this same human creativity that we will need to solve the current waste crisis we have. We cannot change the world by simply looking at it, but we can in the way we live within it.” 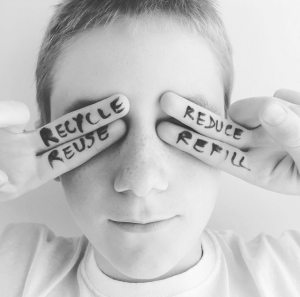 Penzance’s Mini Beach-Cleaner Louis-Matisse is also exhibiting, who says he’s been beach cleaning as long as he can remember. When he was nine years old his brother suggested he used Instagram to record his findings … and the rest is history as they say! He has gone on to be awarded Penzance’s Young Citizen of the Year and was shortlisted in the Youth Plastic Pioneer category in the UK Plastic Free Awards.

Louis started keeping the interesting bits of plastic he’d found on the beach to make artwork to attract different people, which now sells across the globe.

He said: “Sometimes an image is more powerful than words. I am delighted to take part in this exhibition as it is close to my home and it is nice to show local people what I am doing and I will be exhibiting new work / new designs.”

Plastic Free Penzance are co-hosting the exhibition and will be providing information on how individuals, businesses and the community as a whole can take action to reduce impact on the environment.

Community Lead Rachel Yates said: “There are so many things we can all do to help reduce our plastic, and ultimately our climate, impact. 38.5 million plastic drinks bottles are bought every day in the UK, and 8 million disposable coffee cups. Even just a small decision not to buy those things anymore, as individuals as well as a community as a whole, makes a difference.

“The environmental crisis we are in can feel overwhelming and scary, but we do have the power to take action, by making changes to the way we live our lives. Through this exhibition we aim to connect people to the beauty of the ocean, the crisis it faces and the positive action we can all take to help create a better future for ourselves and our children” 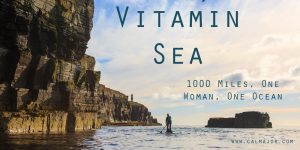 Alongside the main exhibition, a series of family workshops will be held each Saturday afternoon in January. There will also be a mini-festival of thought provoking and inspirational films, featuring ‘Vitamin Sea’ from Cal Major, the Patagonia campaign film ‘Artifishal’ and also cold water surf favourite, ‘North of the Sun’. All films will be introduced and followed by Q&A sessions with industry experts and activists.

All profits from the exhibition will be donated to plastic-free initiatives in Penzance. With huge thanks to sponsors and supporters Headland Printers, Polgoon Vineyard, Newlyn Art Gallery & Exchange and Gary & Richard from Groove Lounge.

All enquiries can be directed to plasticfreepz@gmail.com

You can find out more about Plastic Free Penzance here

Plastic Free Communities exist to free where we live from single-use. They bring people together on a journey to tackle avoidable single-use plastic, from the beach all the way back to the businesses and brands who create it. It’s not about removing all plastic from our lives. It’s about kicking our addiction to throwaway single-use plastic, and changing the system that produces it.

Jupiter Gallery is a joint venture between Lynne Coakley and Chris Dyer. We are established in Newlyn, West Cornwall which for some time has been an important location within the arts and we are pleased to be able to contribute to this significance.

We have a solid belief in the importance of art as a concept that can be implemented into everyday life and as a spectacle to be admired and appreciated independently by communities and cultures. Above all we believe that art is for everyone and will work hard to promote this and encourage participation from as many people as possible.

This error message is only visible to WordPress admins